A brief history of the library

The Glenwood Woman’s Club first conceived the Glenwood Public Library and by 1896 the library was above the Racket Store on the west side of the square. This space was later Hiley’s Glenwood Hatchery and now houses the Quart House.  For 11 years this free library’s care and support was part of their regular work.

Mr. M.J. Martin of Pacific City, a man always interested in worthwhile projects, left $5,000 in his will to the Woman's Club to be used to buy a lot and erect a library building. In 1903, the young library was growing and more space was needed. Dr. F. M. Powell contacted Andrew Carnegie for the purpose of building a new library. Carnegie agreed to give the city $7000 with the city providing $700 annually for the maintenance of the building. Also in 1903, the first library board was appointed. The first nine member Board of Trustees appointed were: W.W. DeWitt, E.B. Woodruff, A.D. French, C. E. Dean, Mrs. D.L. Heinsheimer, Mrs. J. L. Bellatti, Miss Kyle Wright, Mrs. E. S. Bogart, and H. S. Fleming. Through the efforts of Dr. Powell, the Board, and many others, the library was built containing 4400 square feet. The first board meeting held in the new building was January 8, 1907, at which time Miss Emma Beckman was selected as librarian, and was also responsible for all janitorial duties. The Women’s Club donated all their books and materials to the library.

The new Glenwood Public Library was open to patrons on February 4, 1907.

Some years later, Mrs. Elizabeth Martin left $5000 in her will to the Glenwood Public Library. This money is still drawing interest, which is used to purchase books each year. In September 1912, Miss Ruth Brooks was hired as librarian. In 1913 shelving for the children's room was installed. Miss Neva Russell was selected to fill the vacancy left with the resignation of Miss Brooks in 1915. In 1922, the library was forced to close due to lack of funds. By 1925, the library had reopened, as Miss Russell resigned her position that year and Miss Emma Hanna was chosen to be librarian.

In January of 1930, Mrs. Anna Mickelwait was to take over for a month for the ill librarian, but eventually served until her retirement 37 years later. Notably during her tenure, the books within the library began to be systematically cataloged.  Also, a fine of 2 cents per day on overdue books was established in 1931. In 1932, the Woman's Club remodeled the basement, which had been left partially unfinished. Another significant event: the first Summer Reading Program for children was held in 1954. It continues to be a popular event each year.

By 1979, because of growth and expansion of library programs and services, more space was needed. In May 1979, a Study and Advisory Committee was appointed. Those serving on this committee were Carroll Bloom, Neil McPherron, Ione Cook, Evelyn Banks and Harold Kaiman. Fundraising began for the addition and renovation to the library. In January 1982, James Amend was hired as architect for the project. Fundraising continued and bids were opened on July 29, 1982. On August 4, 1982, Caddy Construction Company's bid of $193,626 was accepted. The groundbreaking Ceremony was August 18, 1982. In December 1982, the Library received a $25,000 grant for furnishings from the Kinney-Lindstrom Foundation, Inc., of Mason City, Iowa. By March 1983, books were moved into the new addition. The renovation of the old Carnegie building to tie in with the new addition was completed by late summer. On Sunday, October 9, 1983, the dedication of the new addition was held.

It was in 1980 that the Friends of the Library organization was created and they were very instrumental in the fundraising efforts for the building project. The 75th Birthday of the Carnegie Library was celebrated on February 4, 1982 with a program followed by a tea.  The first annual Volunteer Recognition Tea was held to recognize the many volunteers. In August of 1984, the original Carnegie building needed further attention. Sandblasting, tuckpointing, cornice repair, painting, and the installation of 21 energy efficient windows were completed. The Kinney-Lindstom Foundation, Inc., of Mason City, Iowa this time granted the Library $15,000 to help pay for these improvements.

In April 1992, Genevieve Curry retired as Library Director and in 2001 the Genealogy Room was named in her honor. Denise S. Crawford, who started as Administrative Assistant in 1980, was selected as the new Library Director in 1992. Crawford initiated first free access to computers and then by 1994 to the burgeoning Internet. The library's card catalog and circulation records were also computerized in 1999 under her supervision. In January 2011, Denise S. Crawford retired after nearly 20 years as library director. The Board of Trustees selected Angela Campbell of Davenport, Iowa, as the new library director. Ms. Campbell began her duties at the Glenwood Public Library on January 19, 2011.  During her directorship a renovation of the children’s area was made and a Living Literacy Lab created. She returned to the Quad-Cities in 2013 and was replaced by Jenny Ellis, former library director at Albany, Missouri. The current director, Tara Painter of Lamoni, Iowa, was hired effective September 17, 2015. 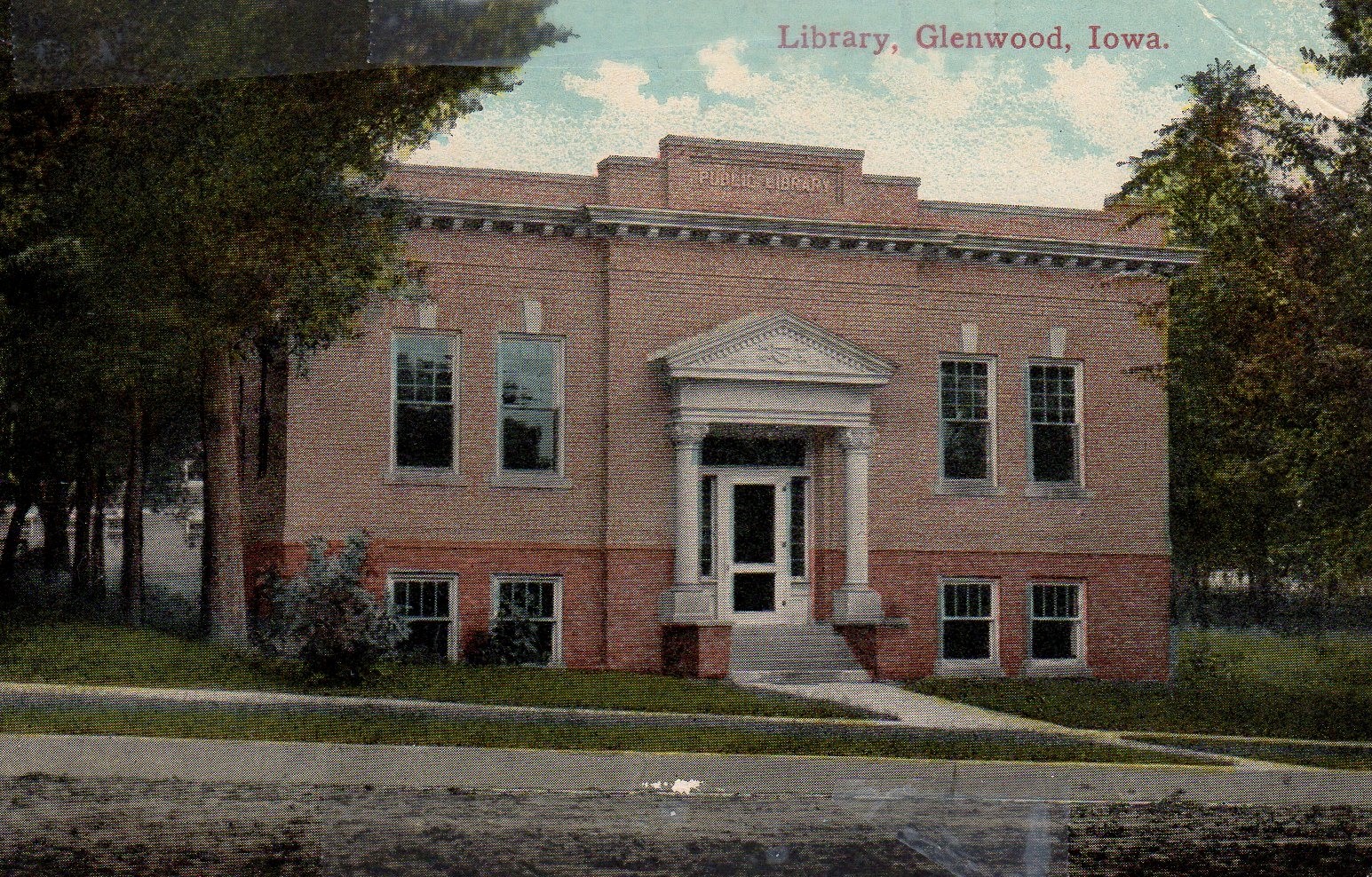